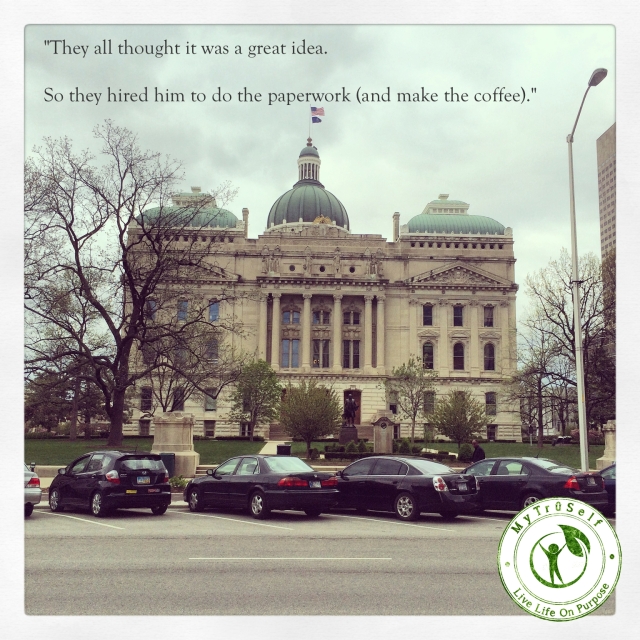 The Monkeys & Their Great Work

Once upon a time, there were two monkeys.  These two monkeys liked to do great work and great work was what they did.  They accomplished a lot of great work, enjoyed it immensely, and managed to be completely self-sufficient, as there were only two of them.

One day, a third monkey came along and asked to join in the great work.
The others thought they could do even more great work if they had a third member of their group, so they enthusiastically embraced the idea.

After some time, it became apparent that a three monkey operation is different than a two monkey operation.  There were laws in place that mandated benefits when there were more than three monkeys working, and someone had to do this paperwork.  Organizations of this size were subject to financial audits, so someone had to keep the books.  The monkeys had to rent a space to work in due to the size of their operation, and someone had to pay the bills.  Someone also needed to make the coffee every morning, and they couldn’t decide who should get up early and do it.

After a while, another monkey came along looking for work.

The monkeys had a great idea.

“What if you did all the paperwork?  That would leave us free to get even more great work done!  You can be the support monkey!”

They all thought it was a great idea.  So they hired him to do the paperwork (and make the coffee).

And they began, three monkeys going out to work every day, and one staying at the office to administrate the operation.

One day, a group of 9 monkeys came into the office, looking for work.

“Perfect!  I will hire you all, and send you off to get even more work done.” said the support monkey.

And so he did.

When the original three monkeys returned at the end of the day to find 9 more monkeys on the roster, they asked the support monkey what had happened.

“I had the opportunity to expand the business, and I took it.  I hope you don’t mind.”

They didn’t.  They liked the idea of more great work getting done.

“While I was at it, I developed a policy manual.  This will be a set of rules that everyone has to follow so that we all get along and do things the same way.”

The other monkeys thought this was a good idea.

“And since I’m the one who stays here while you are all out working, I think that I should be the enforcer of these policies.”

They all thought this seemed reasonable.

And so, for a while, all the monkeys were getting a lot of great work done.

One day, the original three monkeys came to work, and the support monkey said to them “Listen, I need you to go Downtown today, they have some work that needs doing.”

Confused, they said, “We don’t have a contract with Downtown.”

“I signed one last night at a business dinner,”  he replied.

They were outraged.  “You can’t do that without asking us!”

“It says in the policies that the Boss can sign contracts.”  He said smugly.

“It’s the monkey in charge of all the paperwork and making the coffee, but he also gets to make all the decisions.”

“Because he’s the Boss.”

I'm a small town, values-driven family man. I like to learn things, and I like to teach things. I like to read, cook, play music and play outdoors. I enjoy yoga, guns, music, tea, dancing, hiking, and enriching conversation. Professionally, I am a full-time Firefighter/Paramedic, adjunct college faculty, contract educator, dance studio owner, and freelance writer/speaker.
View all posts by Landon →
This entry was posted in TrûLiving, TrûLore, TrûSelf and tagged Boss, Leadership, monkeys, parable, servant leadership, three monkeys. Bookmark the permalink.